The independent Vermont board leading the states push toward universal healthcare has rescinded an RFP for PR amid criticism from officials and media, including Gov. Peter Shumlin. 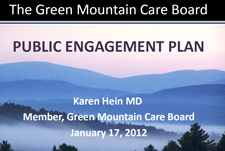 The board heard a proposal on public engagement Jan. 17.

The Green Mountain Care Board, created by the state legislature last year, issued the RFP on Jan. 10 to find an agency or consultant to build awareness and confidence in the board and its role in the states healthcare as it pursued a single-payer system.

The board voted 4-1 on Jan. 17 to scuttle that search after media reports of the search and criticism by Shumlin, who is running for re-election, and his opponent.
Vermont became the second state to pass single-payer healthcare law, aiming to insure all of the states 620,000 citizens. It hopes to have a system in place by 2014.