Especially for Carnival Cruise Lines, owner of the Costa Concordia liner stricken off Giglio island on Italy's west coast, there have been many unfortunate media references to the Titanic. There is simply no comparison between the Mediterranean and north Atlantic ship disasters. 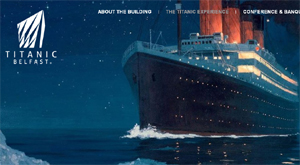 Though the mother of all ship wrecks was glamorized, sanitized and trivialized in the Leonardo DiCaprio blockbuster film, 1,500 mostly poor passengers were lost after the Titanic smashed into an iceberg while the band played on for the millionaires onboard.

Six are deadso far--and 23 are missing in the Costa Concordia crash.

This year marks the 100th anniversary of the Titanic sinking. It also marks the launch of the ghoulish and creeping bid by Northern Ireland Tourism Board and the city of Belfast, where the Titanic was built, to cash-in on the tragedy.

Meet Titanic Belfast, which eyes a March 31 grand opening. Thats about two weeks before the April 15 date that the Titanic went down to the bottom on the sea in 1912. The centerpiece of Titanic Belfast is a massive 150,000 sq. ft, six-floor building with a huge atrium surrounded by hull shaped wings that promises to give visitors the full Titanic experience. Visitors can learn about boom town Belfast, when the city used to make ships. They can explore the elegant first-class exteriors of the ship, relief the drama of its fated maiden voyage and visit the wreck at the bottom of the Atlantic.

National Geographic, in November, cited Belfast as one of the worlds must-see travel destinations of 2012, called it a capital city of Titanic ambition. And the British Queen is expected to be among those to pay tribute to the tourist attraction tied to the damned ship. The Belfast Telegraph reports that there are 35K pre-ordered tickets for Titanic Belfast.

I am going to pass.