Mitt Romney needs to take a break at one of his many homes. As long as the former Massachusetts Governor stays off the campaign trail, he has a chance to beat President Obama.

The aw shucks, just one of the guys act put on by the richer than Croesus candidate is killing him. 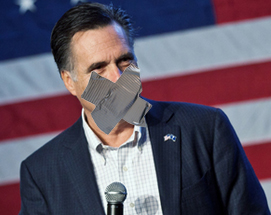 As Romney, who likes to fire people, mixes it up with Americans, its becoming clear how out of touch he really is. His verbal gaffes make Rick Perry proud. [The entertainment value of the GOP campaign will be seriously diminished without Rick. America cant depend on the antics of Ron Paul, who has no shot at the White House.]

This weeks Romney bombshell of dismissing $374K in speakers fees as not very much money resonates with people. The AFL-CIO reports that a working family with a media income of $49,445 would have to work seven years to equal Romneys one-year take of speakers fees.

There is nothing legally wrong with Romneys disclosure of paying a 15 percent capital gains rate. It just reinforces the perception among many that the game is rigged toward one-percenters like Mitt.

What did Romney say about his tax advantage? If theres an opportunity to save taxes, we like anybody else in this country will follow that opportunity, he said in New Hampshire. The typical American doesnt have the same battery of financial advisors as the former Governor of Massachusetts must have. More importantly, Americans expect more from a person who is running for leadership of the country than I am just following the tax rules.

Romney will never be a man of the people. Thats okay.

But he does have to present himself as an authentic person, a guy who shouldnt joke with a bunch of jobless people about being unemployed. Romneys hokum rankles people.