A Dallas judge Jan. 18 slapped a temporary restraining order on Hill+Knowlton Strategies and two executives at the request of Weber Shandwick, which is accusing H+K and the former WS staffers of allegedly taking confidential documents and soliciting clients and staff. 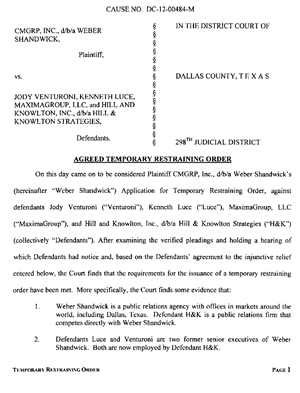 The order prevents H+K and the two executives, COO Ken Luce and newcomer Jody Venturoni, from destroying, using or divulging any confidential information taken from WS, and to return such data to WS.

Tobolowski said unless H+K and the two executives were immediately restrained, WS would be "irreparably injured, imminently harmed, suffer loss and damage" by the improper use of confidential information, further loss of personnel and "loss of confidence and trust of its clients," among other possible repercussions.

H+K said it will "vigorously" defend itself and resolve the dispute.

Venturoni, who led the southwest region and the American Airlines account at Interpublic unit WS, moved to H+Ks Dallas office in December as executive VP for the U.S. region.

In its petition for the TRO, Weber Shandwick said the defendants engaged in "unlawful and deceitful misappropriation" of confidential WS information and trade secrets "as part of a predatory assault against" the firms southwest U.S. operations and beyond.

"These are among the most confidential documents belonging to Weber Shandwick and its clients and possession by H&K and its employees would enable H&K to unfairly compete with Weber Shandwick for clients and employees," WS said in its petition, alleging that she took the data shortly before resigning.