After a thumping in the South Carolina primary, Mitt Romney is taking off his mittens and lacing on boxing gloves to pound Newt Gingrich, chief rival for the Republican nomination who is now surging in the Sunshine State.

If Romney is to enjoy any success against the heavyweight contender verbal pugilist, he must drop the nonsensical corporate/consultant-speak. 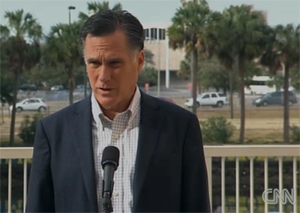 For instance, Romney entered the ring today with a demand to know exactly what did historian Newt do to pocket the cool $1.6M from Freddie Mac? Or as mealy-mouth Mitt put it: Lets also see the relationship between Freddie Mac and the work product with Freddie Mac. Cmon, work product.

Good start, bad follow through. Ask Gingrich about how he cashed in on the carcass of the failed mortgage giant.

CNN reported today that Mitt is bashing Gingrich as being highly erratic. Some whipping! How about calling Gingrich either crazy or nuts rather than highly erratic, which is way too clinical?

Wheeler-dealer Mitt has the irritating habit of referring to companies and businesses as enterprises. To most voters, enterprise is the starship in Star Trek. Romney should not say Bain Capital invested in enterprises. He should personalize the matter by touting Staples as Bains greatest success.

The home office, school supplies, shipping and stationery chain is a place that voters everywhere can identify with. Tell us about the night you spent stocking the shelves at Staples, Mitt.

How about dropping all those royal third-party references? You are not running for king. We did not make a mistake by not releasing our tax records? You made the mistake. Own up to it. Thats what leaders are supposed to do.

And get ready to rumble tomorrow when your super-sized numbers finally come out.

I hope Mitt can go 15 rounds with Newt. It will be a good warm-up for the championship round.