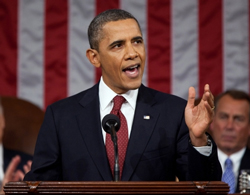 The firm also put into perspective how gridlock chokes off progress in the hyper-partisan Congress. Patton Boggs provides the numbers to back it up why the first session of the 112th Congress was the least productive in decades.

According to the Patton Boggs report:

"When the President signed into law the National Defense Authorization Act for FY 2012 on New Years Eve, it became Public Law No. 112-81. Having fallen seven short of the 88 bills enacted in 1995, the first session of the 112th Congress produced the fewest number of bills signed into law since Congress formally began keeping track in 1947.

With a flurry of signatures on Jan. 3, the President helped this Congress eke out of last place with a total of 90 bills signed into law.

Of those legislative triumphs, 25 extended current law, including four separate ones to temporarily re-authorize the Federal Aviation Administration. Thirteen bills named a post office or court house. [The only accomplishment of my Tea Party/Sarah Palin-blessed freshman Congressman Michael Grimm was House approval of the Sergeant Angel Mendez Post Office on Staten Island to honor the Marine platoon commander who was killed in combat in Vietnam.].

At least five laws were for commemorations or service appointments, like the one providing for citizen regent appointments for the Smithsonian Institution.

Patton Boggs doesnt expect the do-nothing Congress to do much more during the second session. The election looms.