The current issue of The Economist magazine kicks off a weekly special section on China, which is a magnet for multinational PR firms. Its the first time the British publication has singled out a country for coverage since 1942 when the U.S. was deemed noteworthy enough for its own section. 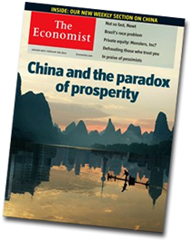 The editors say China gets its own pages because it is now an economic superpower and is fast becoming a military force capable of unsettling America. They also note that the countrys politics is governed by a system that is out of step with global norms.

The Economist believes that China in this age of social media must ease its tight control over free expression because angry people can talk to each other, as they never could before, through the Internet. The country must master the art of letting go.

Chinas development is more than an intellectual interest to those outside the country, say the editors. Whether the country continues as an authoritarian colossus, stagnates, disintegrates, or, as we would wish becomes both freer and more prosperous will not just determine Chinas future, but shape the rest of the worlds too.

In the mind of The Economist, China has far to go to catch the U.S. The U.S. merits six pages of coverage in the current issue, led by an article headlined Newts (fleeting moment), a profile of New York Governor and Democratic rising star Andrew Cuomo, immigration reform and the future outlook of coal as Americas primary source.

China gets four pages with stories on the communist partys foray into capitalism, capital punishment, tobacco boom and tribalism of city dwellers.

The U.S. edition of the 169-year-old magazine gives Britain three pages. Talk about a changing of the international guard.