Huntsworth, which in November warned of the short-notice cancellation of $6M in yearend projects, today announced that it will take a $4.5M reorganization charge in a bid to right the financial ship. 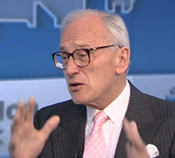 Despite a challenging economic environment, Gummer says Huntsworths business pipeline is strong and expects to rebound this year.

The owner of Grayling, Citigate, Red and Huntsworth Health has begun work on business picked up during the second half of 2011 and cut its dependence on one-off project revenues.

Board members Eugene Beard (former Interpublic vice chairman) and David Puttnam (film producer with credits including Local Hero, Chariots of Fire The Mission, The Killing Fields, and Midnight Express) will not stand for re-election at the May 18 annual meeting.