The New York chapter of the PR Society is the biggest single city-based chapter with 685 members but is strangely passive when it comes to relations with national.

Although former NYC president and former national treasurer Art Stevens said in 2009 that the national conference should be in New York every third year, the current schedule has it in New York once in 28 years and still counting.

San Francisco is the site this year and Philadelphia next year. Cities have been picked for at least the next three years but what they are is a secret.

No one from PRS/NY will even ask national staff or leaders what the future cities are. Normally they would be in the board minutes but PRS stopped publishing board minutes in 2011. It has yet to publish the minutes of the Oct. 15, 2011 Assembly.


Not Aware of Selection Process

We are. National leaders have told us that chapters pitch hard to have the conference in their cities. Philadelphia bested the NY chapter several years ago for the 2013 conference even though it hosted the 2007 conference. The 28-year period from 1991-2018 will thus have one conference in New York.

A key argument was that Philadelphia hotels are cheaper than New Yorks and this allows members from throughout the U.S. to attend.

That argument is pretty silly because very few members attend the conferenceless than 4% said 2005 chair Judith Phair. Attendance of 1,600 last year was equal to 7.6% of the 21,000 members but that figure included hundreds of non-members.

Attendance is boosted by the fact that a sizable proportion are forced to gothe 270 Assembly delegates and the 150+ speakers.

More than half of the 47 exhibitors in 2011 were from the New York area. A New York location would save them lots of travel costs for staff as well as costs of shipping exhibits.

Major PR service companies have told us they dont exhibit at PRS conferences because of such costs. Many more exhibitors would take part in a New York conference.

Vast time, effort and money are spent by the staff on the conference which benefits a small minority of the members and loses money. It is beloved of the staff. Up to 35 spend a week to ten days at the conference city on the PRS exchequer (not to mention advance trips).


NY Favored by Many Groups

Fifty-three groups currently hold their annual conferences at New Yorks Javits Center and nine hold more than one event there each year. They wouldnt dream of going to some other city.

The complete list is at the end of this blog but one of them is the Manhattan Accessories show (MODA) that attracts 8,000 buyers and is held five times a year at Javits.

Its in New York because New York is the fashion capital of the U.S.

The PRS conference should be in New York every year because it has about 20 times the concentration of PR, media, advertising and related communications people--a built-in audience that does not need to take hotel rooms.

Plenty of attendees at the other shows take hotel rooms in the city and the extra cost is deemed to be well worth it.

Harry Zlokower of Zlokower Co. PR is president of the chapter and Lea-Ann Germinder of Germinder & Assocs. is president-elect. Sandra Fathi of Affect is immediate past president. Stevens is a director.


Corbett Ducks Members, Most of Press

PRS chair Gerry Corbett was in town in recent days as evidenced by an in-person interview conducted with him by Scott Van Camp of PR News.

PR News sat down with Corbett to discuss the Societys goals, the challenges of being a PR pro, and the latest hot PR topics, wrote Van Camp Feb. 8.

Why didnt Corbett present himself to rank-and-file New York members or have a press conference with all the PR press presentPRN, PR Week, Bulldog Reporter, PR Newser, Ad Age and this website, all based in New York? The chapter is so alienated from national, we doubt it even knew Corbett was in town.

No national chair/president has addressed the chapter in more than 20 years, although this was a requirement of that post until the 1980s.

A hot PR topic no doubt is Dave Carrs New York Times column Jan. 29 in which he said hard-to-find PR pros deliver slop that is meant to obscure rather than reveal.

Van Camp asked about PRs reputation with the general public.

Said Corbett: I believe these cases of poor management are in the minority. We tend to hear more about the bad cases, and not about the good work being done out there by PR. Id say its an anomaly. I believe PR pros continue to elevate in stature within their organizations

Full text is at http://bit.ly/ybpcwC.

We dont know what hes talking about, either, but its about time someone at the Society faced the reality of PRs standing with the public.

PRS and the Rockefeller Foundation spent $150K on a survey published in 1999 that showed PR specialist ranked 43rd on a list of 45 public figures. We doubt it has improved. A Gallup poll last summer showed ad/PR had dipped five points lower in the past five years. Only 32% of the public have a positive view while 37% have a negative view.


Corbett Is on the Run 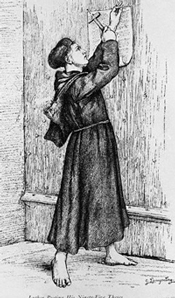 This website as well as members have sent Corbett the questions below but so far he wont acknowledge even receiving them. We feel like pasting them to the door of PRS h.q. on Maiden Lane like Martin Luther nailed his 95 Theses to the door of the Castle Church at Wittenberg (image via).

1. When will members get the minutes of the four board meetings last year and the minutes of the Assembly that was held Oct. 15, 2011?
2. Was there be an in-person meeting of the board in January or was it by telephone as it was last year? When will the board meet in person?
3. Will you reveal the terms of the new three-year contract of COO Bill Murray which started in January? Federal law says members must know the salaries of the top eight executive but a loophole allows an association to delay filing IRS Form 990, which has this data, until Nov. 15 of the following year.
4. Will you provide the 2012 Assembly with the 990 after three years of withholding it from that body?
5. Will you correct promotions to prospective members to warn that they will be second class citizens, unable to hold national office or serve on the Ethics Board, until they pay $410 and go through the accreditation process (which involves no writing or creativity)?
6. Will you stop the false financial reporting to members that books dues as cash when the Financial Accounting Standards Board requires dues to be booked month-by-month? This is especially imperative since the Society will provide webinars (value $150 each) throughout 2012 at no cost to members, eliminating the argument that dues could be booked as cash (except for a small amount to cover publications) because all members received for their dues was the right to say they were members, all other services costing extra.
7. Will you remove from the Society newsroom the media policy that requires you and all officers and members to check with VP-PR Arthur Yann or his staff before responding to a press inquiry?
8. Will you continue the Society boycott of ODwyer staffers although it has been condemned by the National Press Club and PR Watch?
9. Do you agree with Yanns statement that the Society has every right to block any reporter from covering the Assembly?
10. Will you let members see the national list of Assembly delegates, something that has been denied them since 2005? Will you again make a transcript of the Assembly available members and press? The listing in the press room of the 17 directors does not give their e-mails or phones, their addresses, nor who are the five at-large directors and who are the district directors. Doesnt this make press contact with the directors difficult and will you rectify this? How about setting up a blast e-mail function so all directors would be e-mailed at once? The same should be available for the 270 Assembly delegates.
11. Will you reveal your speaking schedule to chapters or elsewhere or will it be a closely guarded secret as it was for Rosanna Fiske last year (who spoke to two chapter memberships)?
12. Do you favor allowing reporters to join the Society and thus have access to PRS financial reports? All press clubs, including the National Press Club which has 750 PR members, allow PR people to join and have full access to financial reports. Most PR groups (IABC, IPRA, etc.) allow press members.
13. Can you come up with any reason why the membership list should not be available to members on a PDF?
14. Will you restore the complete list of h.q. staffers so members can see who is working for them and check staff turnover? Only seven of the 50+ staffers are now listed.
15. Will you again publish the list of 110 chapter presidents as a single document, saving chapter presidents and others the job of visiting 110 chapter websites to get this information?


Annual Events at Javits Center
The Centers Special Events Hall can seat up to 3,200 for theater-style meetings and receptions and 1,700 for banquets. Its newly-renovated 75 meeting rooms have flexible walls that allow for expansion. The Center has nine self-contained halls and hosts 80 major trade shows and 70 special events yearly. They are: