Protesters representing Dogs Against Romney rallied today at Madison Square Garden, host of the Westminster Dog Show, to educate passers-by that the former Massachusetts Governor is anti-canine. It was a good photo-op. 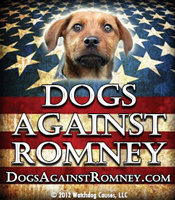 They asked: How can a guy who strapped his family dog, Seamus, to the top of the family station wagon for a 12-hour drive from Boston to Ontario in 1983 become president of a nation of dog lovers? They carried I Ride Inside and Mitt is Mean posters and caught the attention of media.

The Boston Globe reported the dog-on-top-of car-story in 2007 and it just took off. New York Times columnist Gail Collins makes a reference to Seamus in just about every column. According to online comments to the NYT, the reference is a big hit. Romney even drew a rebuke from Fox News' Chris Wallace, owner of a yellow lab named Winston. He asked the Governor, What were you thinking? Romney claimed that Seamus, who became ill during the drive, actually liked the air-tight kennel.

Will Dogs Against Romney dog the Republican candidate throughout the campaign? Whats next? Will Billionaires for Bush street theater group morph into Billionaires for Romney? The Billionaires supported George W. Bush in the 2004 and 2008 election with chants such as Corporations Are People Too. During a campaign event in Iowa, Romney told an audience that corporations are people.

Romney is a natural for the Billionaires.