The tongues of political Washington are on fire with the prospect of Rick Santorum knocking off Mitt Romney in the presidential primary race. It's a splended show.

Whether Santorum wins or flames out in key primary battleground states as Michigan and Ohio, his rise shows the power of PR over the millions of advertising spent by the former Massachusetts governor and private equity kingpin Romney. Rick is running a seriously underfunded campaign that is based on ideas (mostly off-the-wall) compared to the coronation effort of moneybags Mitt. 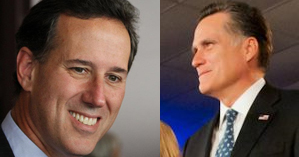 Washington Post columnist Eugene Robinsons Feb. 20 piece Rick Santorum Could Take Republicans Down with Him is the papers most popular article, as of this writing.

Michael Gerson weighed in with a column about how the GOP race is making it easy for Obama.

Conservative columnist Jennifer Rubin, who writes the Posts "Right Turn" column, rips Santorums conservative bona fides. She brands Santorum a reactionary. Rubin wrote Republicans will be clobbered running on the reactionary platform on which Santorum is seeking to sue the power of the state and of his office to reorder society according to this theology. The election of Santorum wound be as radical an undertaking as Obamas efforts to remodel America along the lines of Western European nations, wrote Rubin.

Will Sarah Palin throw her hat into the ring? The Fox commentator and half-term Alaska Governor hinted last week that she could be a candidate if the GOP convention becomes a brokered one. On that note: Gallup found that two-thirds of its respondents want a candidate picked before the confab.

In other words, Republicans want primary voters to pick their poison. They also want Palin to just go away.