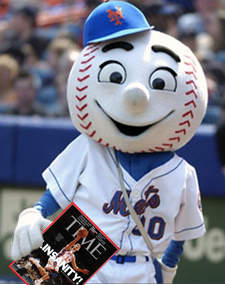 As a loyal Met fan, Ive been keeping an eye on developments from spring training camp at Port St. Lucie. Here are some highlights.

Lefty Jon Niese is sporting a new nose. Former teammate Carlos Beltran used to tease Niese about the size of his schnoze so the 25-year-old pitcher jumped at the chance for rhinoplasty after Beltran offered to pay for the operation. Niese is breathing well and ready for action. Big Jon was 11-11 last year with an E.R.A. of 4.40.

On the legal front, disgraced former equipment manager Charlie Samuels pleaded guilty to criminal tax fraud connected to charges that he stole $2M worth of autographed baseballs, bats and memorabilia during his more than 30-year career. Was the stash really worth that much? After all, its Mets stuff. Lucky Samuels has been banned from Citi Field.

True punishment would have been mandatory attendance at each of the 81 home games.

The Wall Street Journals Matthew Futterman today analyzed the off-season of Major League Baseballs 30 teams. Only the St. Louis Cardinals had a worse Hot Stove Index than the Mets. Futtermans outlook for the Mets: They moved in fences to help David Wright, but the Mets are a big-market team that acts like a small-market one.

Heres a proposal: the New York Mets should change the team name to the Flushing Mets (to heck with the toilet puns) to fit that new small-market philosophy. The team could emerge as the best baseball team in that Queens neighborhood.

The Mets pray that Lin and the Knicks go deep into the NBA playoffs. June 26 is the final playoff date. The Mets will have 75 games under their belt by then before the media give them any play.