What was News International thinking when it allegedly hacked the phone of Cherie Blair, wife of former Prime Minister Tony Blair? 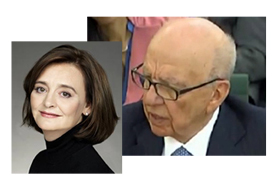 The Blairs are dear friends of News Corp. boss Rupert Murdoch and his wife, Wendi. Isnt Rupert the all-powerful press lord whose deputies rule newsrooms throughout the world with an iron fist? Didnt the alleged hacker fear retribution from Rupe if the dirty deed became public?

Of the 60-plus suits filed in the hacking scandal, this one makes it personal for 80-year-old Rupe, who triumphantly traveled to the U.K. last week to announce the launch of a Sunday edition of The Sun, in a move designed in part to put the News of the World scandal behind him and recover millions in lost revenues connected to the papers shutdown.

Graham Atkins, a lawyer for Mrs. Blair, told the British press yesterday that his client filed a civil suit against News International in relation to the unlawful interception of her voice mails. If true, it means NOTW staffers had little regard to the power of Murdoch. It also outs the totally out-of-control rogue operation that was NOTW.

The Sun was a huge supporter of PM Blair during his ten-year rule that ended in 2007. On a personal note, Blair is godfather to a daughter of Rupert and Wendi. He even traveled to the River Jordan to carry out his baptismal duties.

The lawsuit is a treasure for Ruperts political opponents. Tom Watson, Labour MP and a fierce critic of News International, told The Guardian the Blair suit is a very significant development because we now know that Rupert Murdochs hackers targeted family members of a sitting Prime Minister.

The lesson for all politicians including current British PM "David Cameron is that Rupert Murdoch is only a fair-weather friend, said Watson.
Murdoch, of course, is a skilled political operative. He has used those political connections to further advance his global media empire. Cameron, for instance, has met with Rupe many times since he took office.

The Blair hacking scandal just goes a little too far.