The PR fortunes of the New York Mets continue to unravel as son of owner Jeff Wilpon yesterday gave players orange t-shirts with the U symbol of the 1960s cartoon character Underdog. Unbelievable. It is the latest bonehead move by tone-deaf to PR management that let fan favorite Jose Reyes walk to the now superior Miami Marlins team. 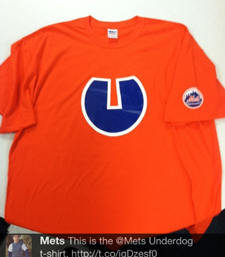 Wilpons shirts send the signal Lets pack it in before the season even starts. Thats a distressing attitude for young Mets like slugger Ike Davis, striver Lucas Duda and the ever-talented Danny Murphy. Veteran pitcher Johan Santana must have second thoughts about his comeback from surgery bid. Why even bother?

In Wrights favor, the cash-strapped Mets will unload him by the summer in a trade for propects. Thats what the team should have done with Reyes since management had no intent of re-signing the reigning National League batting champ. Stay healthy, David. Better times beckon. Happy trails.

During their glorious 50-year history, the scrappy Mets were underdogs in the eyes of most New Yorkers to the corporate overdog team the plays in the Bronx. They just didnt advertise that status on its chest.

The Mets finished below the .500 mark for the last three years. The outlook for the 2012 season is not good due to the financial duress triggered by the millions of dollars that the Wlpons lost in the financial dance with convicted swindler Bernie Madoff. If Junior Wilpon wants to wear a t-shirt to Citi Field this year, he should make one with an L on it. L is for loser. It also could stand for lonely because Jeff will see thousands of empty seats at Citi Field thanks to the mismanagement of the team.