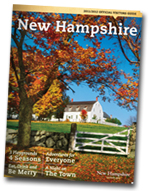 New Hampshire is reviewing its domestic tourism PR account with an RFP process through March 22.

The pact was last reviewed in 2008, when it was worth $110K a year. Leading Edge Marketing, a Newfield, N.H.-based firm led by a former Omni Hotels hotel PR pro, was the incumbent firm then.

Tourism is the No. 2 industry in the Granite State in terms of jobs supports and out-of-state dollars pouring in.

Recreation and business trips during 2010 hit $34M while direct spending reached $4B.

A two-year contract with one two-year option could take the pact through June 2016, according to the RFP released March 2.