The great American tradition of petition-writing is alive and well on the We the People section of the White Houses website. Team Obama created the section because the First Amendment gives the people the right to petition the government. 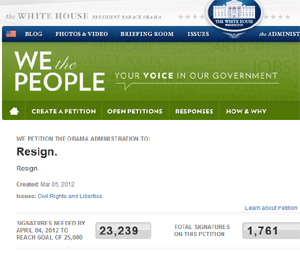 Currently, the site hosts 69 petitions including a one-word one, resign. That petition is supported by 1,760 people.

There is a petition to Keep the U.S. out of a war with Iran. We need investment at home, not another dumb war abroad. Signers of this petition are appalled at the growing chorus of politicians and media pundits pushing for war in this context, especially since many of those who were so publicly discredited by their agitation for the Iraq War are now prominent leaders of the push for war. 5,547 people agree.

The Rush Limbaugh attack on Georgetown law student Sandra Fluke spurred two petitions. One wants Defense Secretary Leon Panetta to boot Rushbo off Armed Services Radio because his remarks this week were well beyond the pale of what should be broadcast to our military and their families, supported with our tax dollars. Its backed by 19,166.

The other wants the Federal Communications Commission to probe Limbaugh for biased and distorted news and for making intimidating statements. Thats signed by 1,057 people. On the other sude of the political equation, a petitioner wants the FCC to investigate lefty and $1M Obama supporter Bill Maher for using a derogatory statement to describe Sarah Palin. 472 people like that one.

There are petitions about government cover-ups of UFOs/ETs, discrimination against atheists, keeping live animals as pets, vetoing Bush tax cuts for the one percent, saving post offices, ending war on drugs, intervention in Syria, corporate personhood, permitting growth of industrial hemp, contraception mandates, antibiotics in farm animals, removing one nation under God from the Pledge of Allegiance, repealing the Patriot Act and lighting the White House blue to raise awareness of colon cancer.

It's a lively part of a very robust White House website.