The Federal Reserve says MetLife flunked its stress test, but the New York insurance giant has mounted an aggressive PR campaign to put the news into proper context (e.g., a matter of apples and oranges) in a move to reassure jittery investors. 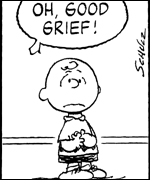 The home of Charlie Brown and the Peanuts gang was one of four of the 19 financial behemoths that failed the stress test. Citigroup, SunTrust and Ally Financial also didnt cut the mustard.

MetLife issued a statement from CEO Steven Kandarian that stressed its strong financial position and ability to whether the current environment and a potential further economic downturn.

Heres the kicker from Kandarian: We are deeply disappointed with the Federal Reserves announcement. We do not believe that the bank-centric methodologies used under the CCAR (Comprehensive Capital Analysis and Review) are appropriate for insurance companies, which operate under a different business model than banks.

MetLife is required to submit its capital plan to the Fed for review because it owns MetLife Bank, which has more than $50B in assets. That represents 11 percent of MetLifes $454B assets.

Kandarian recommends that investors sit tight. MetLife is winding down its banking business and expects the job will be completed by the end of June. That means that MetLife will no longer be a holding company and can proceed with its plan to repurchase $2B in stock and increase the dividend from $0.74 to $1.10 per-share.

Besides being the only insurer on Fed stress test list, MetLife holds another distinction as the only company on the list not to receive TARP bailout money from the Feds.

MetLife shares today closed down 5.83 percent to $37.16. Without Kandarians statement, it could have been worse.