If Greg Smith, author of the scathing attack on the toxic and destructive culture of Goldman Sachs, doesnt opt for a future in journalism, a career in PR beckons. 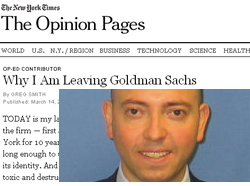 His message is hardly new. Matt Taibbi hung the great vampire squid wrapped around the face of humanity, relentlessly jamming its blood funnel into anything that smells like money, image around the neck of Goldman in his Rolling Stone piece on April 5, 2010. Boy, has that stuck.

Goldman loomed front and center in the Occupy Wall Street protests. OWS original plan was to encamp outside Goldmans headquarters, rather than nearby Zuccotti Park.

The PR genius of Smith is getting the longish 1,271 word article placed in the prestigious op-ed pages of the New York Times. Thats no easy feat for the quiet, low-key and London-based Smith, who is belittled by PR knuckleheads Lloyd Blankfein (Goldman CEO) and Gary Cohn (president) as one of the nearly 12,000 VPs at the investment house. Smith wasnt exactly running with the Masters of the Universe crowd.

[Congratulations to Jake Siewart, Goldmans new global head of communications. And you thought the White House was a tough gig?].

The far from financially flush Times, to its credit, ran yesterdays Why Im Leaving Goldman Sachs denunciation of a firm that is a huge ad spender at the paper. The paper followed up todays front-page lead called Public Rebuke of Culture At Goldman Opens Debate. Kudos.

An aggressive counter-attack of Smith has been launched by pro-business outlets such as the Wall Street Journal, CNBC and Fox Business News. Citing unnamed sources, they speculate that Smith was angry because of a relatively small bonus and lack of hitting the financial jackpot after 12 years at the firm.

Fox Business Charlie Gasparino dismissed Smiths criticism because he never made more than $750K a year, which is precisely the point of Smiths entire piece about putting the emphasis on getting paid over any concern for clients.

Despite Smiths blast, Goldman is going to ride the gravy train for as long as possible. The best outcome of Smiths piece would be to derail efforts of Republicans to do away with Wall Street reforms that are part of Dodd-Frank.