Yesterdays news of Peyton Mannings signing with the Broncos had one clear loser, the Miami Dolphins and their General Manager Jeff Ireland.

Others teams lost out on a quarterback, but for Ireland this was another notable and highly publicized failure to lure proven, quality talent to Miami.

Fans had not been quietly tolerating these blunders. Some previously erected a billboard and flew an airplane banner calling for Irelands ouster.

Following yesterdays loss, one fan tried something others hadnt: Wikipedia.

Slight edits where made to Irelands profile. For starters, his job title was changed from General Manager to Chairman, Department of Terrible Decisions. It didnt end there, the first sentence now reads: Jeff Ireland (born in a Denny's parking lot in Abilene, Texas) is the most incompetent human being in the history of existence." 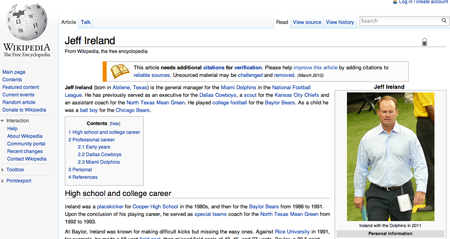 -How many toothpick umbrellas Ireland likes in a cosmopolitan.
-How he cries over waitresses at Applebees not returning his phone calls.
-His fondness of the Dallas Cowboys and ability to sign and overpay their rejects.

See the rest for yourself. The fans edits are preserved in screen shots here and here.

Fortunately for Ireland these revisions were excessive and unverified and were removed in minutes.

Irate fans may have only gotten a couple of moments to laugh at this Wikipedia handiwork, but the news of this attack may have spread further than any airplane banner or billboard possibly could.

The reality is that attacks like this happen all the time and are not new. Jeff Ireland got lucky because most of the changed content was groundless, so it was easily removed. Others targets are not so lucky.


Lessons to be learned
While putting up a billboard and hiring an airplane took thousands of dollars and probably alignment amongst many fans, the Wikipedia attack was executed by one person, cost nothing, and was publicly visible within minutes--and Wikipedias anonyminty means that no one can be held accountable.

For many brands and high profile individuals negative revisions to a Wikipedia page are much harder to remove if they are less extreme and backed by a credible third party source.

Ireland has made some bad personnel decisions--or at least been blamed for them--but he has other neutral to positive accomplishments on his resume that must be inserted into his Wikipedia entry to replace, rebuff, or at a bare minimum help cover up negative attacks.

Some brands and individuals have a very small footprint online. If attacked, they would have a difficult time countering negative claims with indisputable evidence.

The initial negative revisions to Irelands page were caught. However, Id be surprised if more didnt happen in the future--and Id be stunned if all attacks could even be removed because of how well documented his blunders were and there are enough credible experts to back up some less extreme claims against Jeff Irelands track record.

Unlike an airplane banner, which is visible for minutes or a billboard that is visible for weeks, a Wikipedia article can be visible indefinitely. Gary Braun, co-host of The Tony Kornheiser Show and Vice President of a Washington, DC video production company, pointed out that Fan love/hate relationships with management and ownership are nothing new, but the immediacy of the internet and instantaneous nature of the news cycle have completely changed the game and made easy targets out of many.

In many cases a Wikipedia entry is at or near the top of search results on brand name companies, individuals, products, etc. This affects initial impressions and has the potential to spread possible negative information regardless of whether or not it is true.

An infinite number of reputation attacks happen online every day.

While Jeff Irelands Wikipedia page has been stripped of the negative revisions, I'm stunned that Miamis fans have not yet included many of the accurate and indisputable blemmishes on Irelands track record such as draft busts, asking Dez Bryant whether his mother was a prostitute, and bending over backwards to acquire coaches and players that continually spurn him. These are facts, not opinions, and can survive against even the most biased or judgmental Wikipedia editors.

Brands and high profile individuals would be wise to watch this quietly and take precautions to never be in Jeff Irelands shoes.