Gerard Corbett, chair of the PR Society, identified only as Gerard Corbett, Manhattan, had the top letter-to-the-editor in the New York Post yesterday in which he lectured Goldman Sachs to practice honest and transparent communications to its employees, shareholders and the public 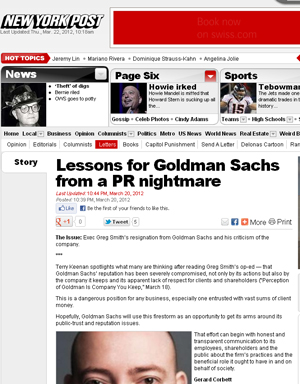 This is mountainous hypocrisy coming from a trade association head who is refusing to answer (or even acknowledge receiving) 15 questions put to him by members, including Fellows. Members want to know where are the minutes of the last five board meetings and the minutes of the 2011 Assembly that took place Oct. 15, 2011?

Corbett, who will not reveal his speaking schedule, is also being asked to divulge the terms of the new three-year contract of COO Bill Murray (2010 pay/benefits: $377K); transcripts of the Assembly that have been withheld since 2005; identity of Assembly delegates that has been withheld since 2005, and whether the formal press boycott against the ODwyer Co., announced on Sept. 1, 2011, has been repealed.

PRS VP-PR Arthur Yann denied on PR newser March 6 that any such boycott exists but refuses to say whether ODwyer staffers will be admitted to the 2012 Assembly/conference in San Francisco Oct. 13-16.

The Society press boycott has been condemned by the National Press Club and PR Watch but PRS ignores both.

Especially interesting in the Corbett letter is his charge that Goldman has shown apparent lack of respect for clients and shareholders.

The PR Society has shown contempt for its members by refusing to answer their questions or confront them in person. A $30 dues increase was passed last year without leaders or staff ever facing any chapter memberships in person on the issue.

Rosanna Fiske, 2011 chair, only addressed two of the 110 chapters last year. Its been more than 20 years since an elected head of PRS addressed the New York chapter.

Federal law requires that the pay/benefits of the top eight staffers of non-profits be made available to the members. But PRS uses a loophole in the law to make members wait almost two years for this information.

This website is attempting to get the 450-member Houston chapter of the Society to present the questions to Corbett and the board but the Houston board thus far refuses to put the issue to the chapter membership for a vote.

Houston in 1985 led a failed revolt against national leadership on the issues of withholding information and location of PRS h.q. Houston members withheld dues until they obtained more info. However, their motion in the Assembly, passed overwhelmingly, that the Assembly decide the site of h.q., was ignored by the national board which then cut Assembly meetings from two a year to one.

Here are the questions:

1. Where are the minutes of the last five national board meetings and the minutes of the 2011 Assembly?
2. What are the terms of the new three-year contract of COO Bill Murray that started in January 2012? (Pay/benefits were $377K in 2010).
3. Where are the transcripts of the Assemblies since 2004?
4. When will new members be told they cant hold national office or serve on the Ethics Board until they pay $410 and become Accredited?
5. When will the Society obey FASB rule 958-605-21-1 and defer dues income instead of booking a years dues as cash?
6. Will the Society provide IRS Form 990 to the Assembly this year for the first time in three years? (It shows pay of eight top staffers).
7. The Society on March 6 said on PR Newser that there is no boycott against the ODwyer Co. although a written boycott bans ODwyer staffers from Assembly and conference coverage. What is the truth?
8. Will Chair Gerry Corbett reveal his speaking schedule? Past chairs have refused to do this.
9. Will you give reporters access to the quarterly financials and annual audit? These are available only to members and reporters cant join.
10. Will you restore the complete list of 50+ h.q. staffers? Only seven have been listed the past three years.
11. Will you publish the national list of Assembly delegates after withholding this since 2005?
12. Will the 134 chapter, section and district leaders again have a Leadership Rally in New York in June at a cost of $140,000? Each receives $550 in expenses plus five free meals worth another $200.
13. Will you continue the boycott against the ODwyer Co. although the National Press Club and PR Watch have condemned this?
14. Can you provide any reason why the complete membership list is not available on a PDF? You cancelled the printed directory in 2005 after providing it for 50 years citing printing and mailing costs. A PDF avoids such costs and is 100% up-to-date.
15. Will you restore the list of 110 chapter presidents that was on the Society website. Visits to 110 chapter website are now required to compile such a list. This cuts down on interaction among the presidents.