America's most famouse cheese purveyor, J. L. Kraft, must be spinning in his grave following news that his namesake company is junking more than 100 years of goodwill by naming its soon-to-be spun-off global snacks business Mondelez International. 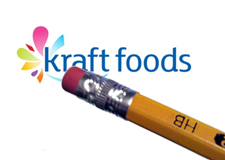 For those keeping score, thats mohn-dah-LEEZ. Geez! Sounds like the name of a new dance craze.

People versed in Latin, such as Roman Catholic cardinals and bishops, know that monde is Latin for world. But even the Roman curia would be stumped by delez, which Kraft Foods Inc. helpfully explains is a newly minted concoction to mean delicious.

The international part of the new moniker is supposed to relay the global nature of selling thinks like Oreos, Fig Newtons and Nutter Butters. It's Mondeloco.

In Krafts press release, CEO Irene Rosenfeld says Mondelez perfectly captures the idea of a delicious world. She expects the name to serve as an umbrella for our iconic brands, reinforce the truly global nature of this business and build on our higher purposeto make today delicious.

Mary Beth West, chief marketing officer, of course, is thrilled with the name Mondelez International. It is a single word to capture everything about what we want the new global snacks food company to stand for. Go figure.

The $18B grocery business gets to keep the good stuff, which is the Kraft Foods identity.

The only silver lining that I see for Kraft is that the company did not pay a corporate branding outfit big bucks to come up with a nonsensical gem like Mondelez. Kraft relied on in-house smarts.

One thousand of its 127,000-member work force suggested more than 1,700 names for the new $35B snacks behemoth. Mondelez was suggested by one person in Europe and another in North America, which is hardly a sign of widespread backing for the new name.