You can forget about the one percenters ruling Wall Street. Shades of Brownie, youre doing a heckuva job is the startling fact that nine percent of PR/marketing people in the financial services sector believe they are doing a perfect job, according to a survey published Monday by Makovsky + Co. and conducted by Echo Research. 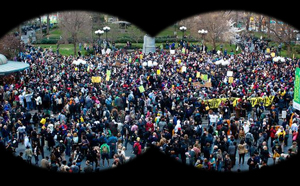 Who are these nine percenters? Are they the same clowns who give Congress a high favorability rating? Are they the crazy bunch that thinks Texas Congressman Ron Paul has a shot at the White House?

That perfect rating comes in the aftermath of the collapse of the global financial markets, bailout that triggered rage across the Street throughout the land and the Great Recession. Another huge stretch, 34 percent of respondents give PR an above average grade.

The Makovsky poll shows how out-of-touch Wall Street is with the rest of the country. Thirty-eight percent were surprised by the Occupy Wall Street movement. But now that they have witnessed the widespread support earned by Occupy, 71 percent say its push is not going away any time soon.

And in the relatively speaking department, Wells Fargo and still very wobbly Bank of America top Citibank and Chase in the best corporate reputation department.

Another survey that hit my email today finds that although Americans are getting more access to corporate info (a view supported by 52 percent of respondents), they dont feel it is easier to hold them accountable (30 percent).

The Hill + Knowlton Strategies poll reports that disconnect creates an ever more skeptical public. It believes the best route for Wall Streeters would be to engage the public by meeting with community leaders.

Meeting with the Occupiers would be a good way to start.