Since taking the helm from the sainted Steve Jobs in August, Apple CEO Tim Cook has certainly put his mark on the company.

First, he restored the dividend to distribute a portion of the companys $100B cash trove. 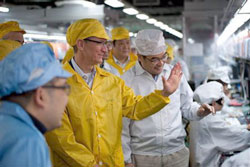 Second, Cook opened diplomatic relations with China, dropping in for a high-profile visit with the countrys future leader vice premier Li Keqiang and officials from the Ministry of Industry and Information Technology and Ministry of Commerce. The Chinese rolled out the red carpet for the Apple boss.

The Wall Street Journal reported that Li meet with Cook at a compound often used for foreign dignitaries. Cook also met with the mayor of Beijing and visited an Apple store. It was great PR for Cook. Jobs never had a hankering for government relations work. Though China is a major Apple customer and supplier, he never visited the country on official business.

Apples PR department, however, has a long way to go before it catches up with savvy Tim. It is still operating in Steves world.

Apples press shop distributed a photo hand-out of Cook decked out in a yellow space suit and cap visiting the troops at a Foxconn Technology facility. Foxconn is known as the sweatshop maker of Apple components as well as for the number of worker suicides. [The company today pledged to improve working conditions.]

In the photo, Cook is smiling and waving to the Foxconn workers. Its simply too condescending, and smacks of the phony photos of the Great Successor that are coming out of North Korea in an effort to show that over-his-head Lil Kim has a firm grip on the military and political apparatus of the Hermit Kingdom.

No further comment on the Foxconn visit is available.

Kim Jong-uns minders must be proud of Apples PR team.