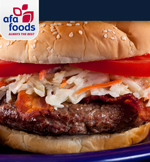 Ongoing media attention has called into question the wholesomeness of the meat, said AFA interim CEO Ron Allen in court documents. That unwanted focus has dramatically reduced the demand for all ground meat products.

He believes an orderly sale of the company under Chapter 11 protection will unlock its value and provide a smooth transition for our employees, customers and other business partners.

The company employs 850 people in plants in Pennsylvania, New York, Georgia, Texas and California and generates annual revenue in the $1B range. It is owned by billionaire Ron Burkles Yucaipa Cos. investment arm.

Beef Products Inc., a leading producer of BLBT, has suspended production at plants in Texas, Iowa and Kansas due to the pink slime controversy. BPI has worked with Ketchum on the crisis.

Branstad today called for a Congressional probe into the origins of pink slime, which he calls a misinformation campaign against a product that is healthy and safe.