Sarah Palin officially joined the lamestream media this morning as guest and co-host of NBCs Today. The paid Fox News contributor was a hit as she joked with Matt Lauer and the gang and paid tribute to Tina Feys impersonation of her as pretty clever. 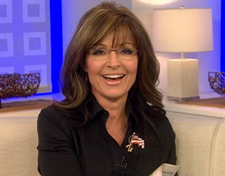 The program humanized Palin, who plays the role of shrill attack dog on Fox. Today showcased Palin as cultural vs. political icon.

Palins appearance was a shrewd counter-programming move by NBC against arch-rival ABCs Good Morning America, where Katie Couric held court today. Couric famously demolished Palins Vice Presidential bid by asking the former half-term Alaska governor about the papers that she read. On Today, Palin joked about the Couric ordeal and was shown prepping for the appearance by appearing with a stack of newspapers.

During the program, Palin talked about Oprah Winfreys woes at the OWN network and suggested that having some conservative guests would help put that cable network on track. She also said Mitt Romney isnt the sure-fire Republican nominee because there still could be a bit of a shake-up in the race.

Sarah didnt hint that she may throw her hat into the ring at this time. Her choice for president is anybody but Obama.

Palins Fox News contract expires next year. With President Obama re-elected, Fox News chief Roger Ailes is unlikely to renew Palins contract. A future role in the lamestream would keep Sarah in the publics eye until the election of 2016 rolls around.