The Easter season is truly upon us. Newsweek has an illustration of Jesus in Times Square on its cover for a piece about Christianity in crisis. For its part, Time has a cover rethinking heaven. 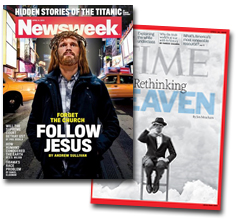 The rival magazines have a tradition of taking a shot of Christianity as its holiest day of the year, one that celebrates the risen Christ, nears. Newsweek editor-in-chief Tina Brown wants to know, Why has religion been so thoroughly hijacked by political hucksters and faith-based hypocrites bereft of basic humanity?

It found a huge disconnect between Tina's gang and the rest of America. More than two-thirds of Americans believe that religion coverage is too sensationalized, like the stories presented by the newsweeklies. That view is shared by less than 30 percent of reporters.

It may be a blessing that Newsweek and Time carry religion themed covers only during the Easter season. When it comes to religion, reporters often dont have a clue about what they are writing about. Only 19 percent of those surveyed by Knight and Bliss say they are very knowledgeable about religion. Those reporters, however, are familiar with their own traditions, not the wider world of religious practices.

The media cant even figure out the proper definition of the word Christian. To them, its a term limited to born-agains and evangelicals. Geez, what am I chopped liver? Liberal Catholics and mainline Protestant groups are just asor perhaps even more--Christian than politically conservative believers.

For example, the media believe its more fun to rip the institutional Catholic Churchs role on contraception, despite that fact that 98 percent of American Catholic women have used birth control. Its much sexier to write about how ObamaCare forces Catholic hospitals and schools to turn to private insurers to provide contraception coverage for employees, rather than report about how those institutions do Christ's work daily by serving the neediest of all faiths.

One thing is certain. Time and Newsweek will be on the religion beat a year from now.