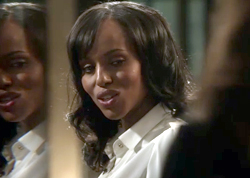 Scandal, starring Kerry Washington as a high-powered PR counselor in D.C., portrays a ruthless firm that engages in bribery, blackmail, suppression of news and whose leader not only has her own affair with the President of the U.S. but discourages another woman from reporting the same.

Washington, who played the wife of Ray Charles in Ray, heads a slam-bang firm that mostly works behind the scenes doing deals and pulling strings. Staffers refer to themselves several times as gladiators in suits. They are ready to do just about anything to get their way.

The supposedly sterling character of PR firm head Olivia Pope (modeled after D.C. firm head Judy Smith) that was built up in the first 45 minutes of the show crumbles when it is revealed Pope had an affair with President Fitzgerald Grant, played by Tony Goldwyn.

Lying in a hospital bed at that moment recovering from a suicide attempt is another woman who claimed she had an affair with Grant. Pope had advised her to keep quiet about it or risk becoming another Monica Lewinsky and ruining her life as well as upsetting the country.

Smith went on ABC-TV News right after the show to state she never had an affair with any president.

Another subplot involves a closeted gay war hero whose female friend had been murdered and who looks like the main suspect.

Popes co-workers get access to the crime scene by blackmailing a policeman on duty (threatening to reveal he went to a house of prostitution) and then giving $500 in cash and a pizza to the owner of a restaurant to get access to a security videotape.

Pope, who previously was communications director for Grant, appears to have ready access to the Oval Office.

The pace is fast, reckless and full of power plays. Staffers of Pope are fixers whose modus operandi appears to be pure expediency.

A D.C. power figure from the 1980s, Bob Gray, had worked for President Reagan as campaign manager and parlayed access to the White House and other centers of D.C. power into a firm with $20 million in revenues (including about $8 million in expenses). Susan Trento wrote about Gray in "The Power House," inferring that he worked closely with the Central Intelligence Agency.

The Gray firm was charged with failing to comply with the Foreign Agents Registration Act and was sold to Hill & Knowlton, his former employer.
Gray sued Trento. The suit was settled out of court.