Two D.C.-area PR pros are behind the runaway blog hit "Texts from Hillary Clinton," which shows the Secretary of State engaged in various imagined text-message conversations with celebrities and political leaders. 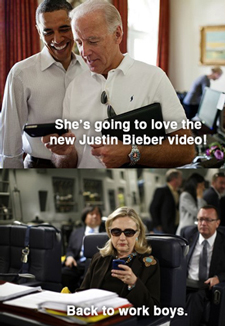 The blog's authors -- Adam Smith, communciations director for election reform group Public Campaign, and Stacy Lambe, an A/E for clean tech PR firm Tiger Communications -- were invited to meet Clinton at her office this week, where she autographed a copy of one of their blog posts and posed for a photo.

Smith told Metro Weekly they hatched the idea for the blog last week when discussing a photo taken by Reuters of Clinton in sunglasses using her blackberry aboard a flight to Libya.

The Reuters photo and another by a Time photographer aboard the C-17 flight from Malta to Tripoli in October are the centerpieces for Clinton's imagined text conversations on the blog.

Hillary told the duo that her favorite post was one depicting her and actor Ryan Gosling, an Internet meme himself.

New York Times columnist Maureen Dowd picked up on the Tumblr hit and sees Clinton's embrace of the blog as symbolic of an image turnaround for the former senator, who now enjoys broader approval than her boss, President Obama.


"Her savvy public image gambit on Tuesday sent a signal she may not be leaving the stage forever. She has not only shored up her techie cred and popularity with young people. Hillary, who kept the press at a distance in 2008, is now well-liked by the press corps traveling with her around the world. Unlike Obama, she seems to enjoy going out with reporters and having a cocktail after a hard day of trilats."