It reported that editorial space was for sale at well-publicized prices not only at Chinese media but media in other countries. 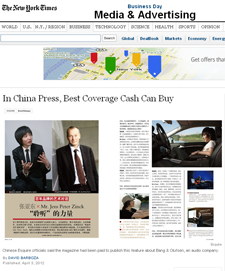 The Chinese play for pay story must be paired with the latest stats on U.S. newspaper ad revenues.

Newspapers are cutting staff or closing in large numbers as circulation also declines from 60 million+ daily to around 45 million.

No doubt the same thing is happening in China and other countries. Major companies that dont advertise nor buy any subscriptions to publications and/or broadcast media are showing up with long pieces that are ill-disguised ads and asking for space.

No one ever accused the Chinese of being stupid. They know a bad business deal when they see one and do not like getting stiffed by PR firms that are well paid to place stories for clients who benefit from editorial-style materials that are far more effective than paid ads.

PR pros traditionally cite the Macy 10-1 rule meaning one inch of editorial is worth ten inches of ads.

An example given in the NYT story is Bang & Olufsen paying Chinese Esquire $50,000 to run a five-page feature. Going rate to show an executive on a TV show is $5,000 for a total of five seconds.


Pay for Play Should Be Identified

Failure to say that editorial matter has been paid for compromises the media involved. Theres no excuse for a practice that will do nothing but hurry the decline of media.

But media are finding themselves between a rock and a hard place currently because not only have ads dried up but so has circulation. Recent generations have not acquired the habit of reading the daily newspaper nor of subscribing to magazines.

PR people and ad executives have to come up with a new equation or there will be fewer and fewer legit media to cover their activities.

Few individuals today will subscribe to anything on their own, looking for their companies to do that. This has resulted in the disappearance of at least seven PR publications including PR Reporter and PR Quarterly, both in their 50th years.

The ODwyer Co. has been hit with pay for play charges because we are asking firms in our rankings to do business with us commensurate with their sizes.

Most of the firms in the rankings acknowledge that publicity from the rankings generate leads and results in accounts, and thus the ODwyer website is worth supporting. There is a definite return on investment.

A few cling to what has long been the definition of PR for business people who drive a hard bargain: free advertising. Not only is it free, but it is far more effective than any ad could ever be. The quest of such businesspeople is to get as much coverage for as little as possible.

This is one reason for the current love affair with social media. Its all free.

Media that demand ads for story coverage are playing with the devil but they can demand that those who place stories or statistics that generate business leads should at least subscribe.

PR firms can purchase website licenses so that all their employees can see coverage about their own companies as well as the industry.

Firms that take a hard line with media, saying, You wont get a nickel from us, do not deserve to be covered by such media. Reporters have to be businesspeople in order to survive.