As the U.S. deploys its second aircraft carrier force to the Persian Gulf, its time to have a serious debate about a potential U.S. military strike against Iran. 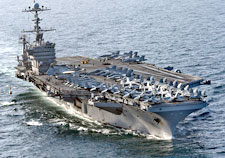 The Navy claims the USS Enterprise is on a routine mission as it joins the USS Abraham Lincoln to patrol vital oil shipping lanes. But whats routine to the Pentagon may sharply conflict with the view from Iran, a nation with a military capability able to inflict damage on the American fleet.

The bulked-up carrier force could be viewed in Tehran as either a provocation or run-up to a war that justifies an asymmetrical attack against the U.S. fleet.

When I was growing up in Brooklyn, kids were told to never provoke a rat when its back was up against the wall.

The American public has little appetite for more involvement in the morass of the Middle East. After being hoodwinked into war against Saddam and now bogged down in a clueless mission in Afghanistan, its high time for the U.S to put an end to military adventures.

Fifty-six of respondents agree that the U.S. should support Israel if it decides to attack the Iranian nuclear program. Only 45 percent of the polled, however, back an Israeli move to destroy Irans nuke program.

Theres no question that the U.S. has the firepower to win the day in Iran. Do we have the moral authority or will power to occupy a nation of 75M? Iraq has 32M people. Afghanistan has 35M souls.

Neither has been a cakewalk.

The wind-down of the madcap Republican primary offers a prime opportunity for an adult discussion between President Obama and Mitt Romney over Iran.

Let the debate over Iran begin. We dont want to get fooled again.