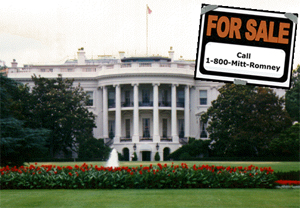 When it comes to good news, Mitt Romney seems to be snake-bitten. Following the day that Gallup released its first presidential tracking poll showing the former Massachusetts Governor up two points over President Obama, comes news that a joint fundraising campaign is selling special access to Romney in June at a California retreat. Another option: yet to be determined access at the Republican National Convention in Tampa in August. The price: a cool $50K donation.

What's to stop the marketing of businessman Mitt? The White House is the ultimate financial prize. If he wins the election, cash machines will be installed in the White House, which will be rebranded as Romney fundraising central. Do you like that Gilbert Stuart portrait of George Washington on the wall? Its yours for a price.

The place is big enough to rent out for special galas hosted by Romneys supporters among the one percent. As owner of multiple homes, Mitt and Ann could opt out of the White House entirely to increase its money-raising capability. GOP high-rollers like Sheldon Adelson or the Koch Brothers might be interested in renting the White House for a couple of weeks. It would be a pretty cool diversion. And what a view!

Americans used to enjoy full access to the White House as job-seekers, prowling the corridors in their quest for patronage jobs. Andrew Jacksons mob famously trashed the place after the liquor ran out. Romneys advisor could claim that Mitt is returning the White House to the people--his kind of people.