In the aftermath of Hilary Rosens remark about Ann Romney being clueless about the struggles of working women, the wife of presidential candidate Mitt and mother of five boys was on a PR roll. 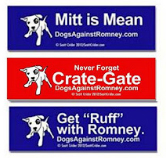 The GOP basked in the manufactured and phony outrage about Democrats not appreciating the hard-lives of stay-at-home moms. Thats so yesterday.

The ghost of former family pet Seamus once again bit the Romney campaign. Seamus was the Irish Setter that Mitt crated on the roof of a station wagon during a family vacation from Boston to Ontario. When the dog was stricken with diarrhea, Romney pulled into a gas station to hose the crate down, before continuing on his way.

Ann claims that Seamus loved the outdoor ride and got sick--not from sheer terror--but from a piece of turkey. Cmon, Ann. When was the last time that you saw a dog riding on the roof of a car that is zipping down a highway at 65 miles an hour? Its just not done and certainly never to beloved family pets. Your defense of Seamus is off-putting and shows you are as out-of-touch as Mitt is.

Though Rosens remarks were taken out of context by the great Republican spin machine, the Democratic operative apologized. DogsAgainstRomney.com, which was blistering Mitt for Crate-Gate, now has Ann in its sights.

Roof-rider Seamus is a fact that will dog the Romney campaign.

Also, did you hear the one about the Romney fund-raiser who was arrested in 1959 with group of college buddies for killing and barbecuing a dog in a city park in Peoria? The info is at DogsAgainstRomney.com.