Barnes & Nobles announcement today of a $300M partnership with Microsoft is good news for lovers of books in both print and digital form. The deal establishes a new company comprised of the Nook e-reader and its college book division. B&N will own 82 percent of the entity that initially is valued at $1.7B. That yet unnamed outfit holds a greater valuation than the rest of B&N 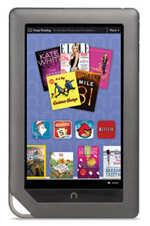 Nook is a worthy competitor to Amazons Kindle in the fast-growing e-book market. It has about a 30 percent share compared to Amazons 65 percent.

Prior to the deal, there was widespread worry that financially weak and acquisition-target B-N would be unable to bankroll further growth for Nook. That perception goes away due to Nooks potential access to Microsofts deep pockets. Nook is here to say. [Full-disclosure: I own a Kindle, not a Nook.]

B&Ns stores may not have the design sizzle of Apples stores, but they serve the same purpose. Customers get a hand-held introduction to Nook by a highly trained sales force. Its a vital marketing advantage that B&N has over Amazon.

For Microsoft, a non-player in the e-reader market, the B&N outlay is chump change in its battle with Amazon. The initial benefit is a Nook app for Windows 8 and access to college students.

The deal is a PR win for both B&N and Microsoft.