Occupy Nationals Park is getting a lot more media play these days than the Occupy Wall Street movement, which went into a winter hibernation that pretty much removed it from national consciousness. The going dormant strategy was a mistake. 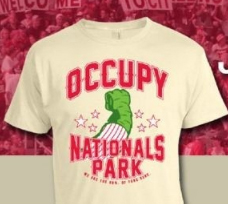 Hordes of obnoxious fans of the Philadelphia Phillies Major League Baseball team adorned either in team garb or wearing ONP t-shirts [Full disclosure: Lets Go Mets] invaded the home of the Washington Nationals over the weekend.

Crazily thinking their team has a shot at the National League East division, management of the Nationals had worked to ban followers of the Phillie Phanatic from spoiling the stands. Thats quite a turnaround from recent years, when the doormat Nationals welcomed anybody with a pulse. When the Phils went to D.C. in the past, the stadium was rechristened Citizens Bank Park South.

With its calls for a May 1 general strike, OWS tried to get back on the media landscape. The bid largely fizzled, though I did view an enthusiastic OWS march from the Madison Ave window of odwyerpr.com worldwide headquarters.

The May issue of FAIRs Extra notes: While it is certainly true that prior to Occupy, there was virtually no discussion of class issues in the mainstream media, its clear that as Occupy faded from coverage, the media turned away from the persistent issues the movement is trying to highlight.

The most prominent slogans of OWS, We are the 99 percent and The One Percent, have made their marks as ways of talking about the income chasm in America. FAIR rightly notes that those terms could become buzzwords and cease to have any connection to the way American capitalism produces and reproduces economic and social inequality. That would be the same way that the Philadelphia gang is using Occupy as a buzzword to torment the poor Nats.

If Occupy wants to remain relevant, it has to occupy something.