Tip of the hat to the White House PR machine for the skillful roll-out of president Barack Obamas evolution in support of gay marriage.

It was master stroke to have widely perceived loose-cannon VP Joe Biden drop the bombshell on Meet the Press that he is absolutely comfortable with same sex marriage. [Full disclosure: I believe Biden is the most important player in the Obama administration.] 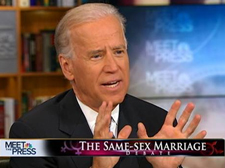 Bidens remark generated a media frenzy that would have been directed at the president when he came out on ABC News. Joe took the heat for Barry. More cerebral than Joe, Education Secretary Arne Duncan followed up on Bidens support of gay marriage just ahead of the presidents big announcement. I wouldnt be surprised if Hillary Clinton closes the deal.

Some worry that Obamas support for gay marriage hurts his election chances in places like North Carolina, which the Democrats hope to retain in November. The Tarheel State yesterday banned same-sex marriages and civil unions in a landslide vote.

Tony Perkins, head of the conservative Family Research Council, gleefully noted that black voters in N.C. -- a key Obama constituency -- voted in favor of the marriage ban. Question for Tony, where are those black voters going to go?

Perkins and others overlook the simple fact that the general population has evolved on gay rights much faster than the President has. According to surveys compiled by PollingReport.com, 50 percent of Americas support gay marriage. Forty-five percent oppose. Thats a huge swing from 1996 when nearly 70 percent of the population opposed gay marriage. The trajectory of support for gay marriage is on the way up. On gay marriage, Obama is on the side of the angels.

His opponent, Mitt Romney, is stuck in the 1950s with his restrictive view of marriage as a bond between a man and woman.

Obama's support for gay marriage will give him a huge boost among young people, a vital part of his re-election effort. They apparently werent as energized with Obamas campaign this time around. The president's announcement will fire up that base. Just take a walk on any college campus, and ask students about their opinion on gay marriage. They will want to know why you are asking the question in the first place.

Duh! This is still America, isnt it?