Facebook isnt getting much of a honeymoon on Wall Street as its shares today are down nearly nine percent to around $34, off Fridays $38-per-share debut IPO price.

Only a gallant goal line stand by lead investment firm Morgan Stanley saved Facebook from the ultimate put-down of closing below the opening sale price. That would have officially branded Facebook an IPO bust. 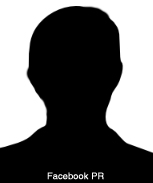 In his February Securities and Exchange Commission filing, newlywed CEO Mark Zuckerberg famously told potential investors that the social networker was not originally created to be a company. It was built to accomplish a social mission  to make the world more open and connected. But after raising a cool $16B on Wall Street, Facebook is very much a company.

Companies have the responsibility to appoint real people to communicate with shareholders and the press.

Facebooks opening and following day flops on Wall Street have many investors scratching their heads. The media, which stoked the massive hype machine leading to the IPO dud, have their own questions. Were they sold a bill of goods, swallowing the line of nearly unlimited potential for a company with more than 900M users?

At the very least, they deserve a name to which they may vent.

Washington Post CEO Don Graham is a director at Facebook. He knows a thing or two about media relations. Graham should tell Zuckerberg that his dream of a company that is open and connected can be attained in part by being open and connected with investors and the press. That means names of people to email/write to or chat with.

Congratulations on the wedding, Zuck.