Congratulations to SpaceX CEO Elon Musk for todays historic launch of the Falcon 9 rocket carrying a Dragon spacecraft from Cape Canaveral in the initial stage of the effort to become the first commercial company to send a spacecraft -- packed with supplies -- to the International Space Station. 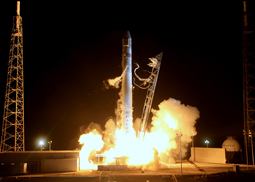 More kudos to Musk for the big shout-out that he gave NASA during todays press conference, a media event largely focused on SpaceXs grand achievement. He said:

I would like to start off by saying what a tremendous honor it has been to work with NASA. And to acknowledge the fact that we could not have started SpaceX, nor could we have reached this point without the help of NASA. Its really been an honor to work with such great people.

Administrator Charles Bolden congratulated SpaceX for the successful launch and the NASA team that made it possible to begin a new era in exploration, a private company has launched a spacecraft to the International Space Station that will attempt to dock there for the first time. Though theres a lot of work ahead to successfully complete this mission, we are off to a good start.

John Holdren, assistant to the president for science and technology, called the launch a new era in American spaceflight. He continued: I could not be more proud of our NASA and SpaceX scientists and engineers, and I look forward to following this and many more missions like it.

The most challenging aspects of the mission are ahead. Beginning May 24, Dragon will begin a series of complicated tests and maneuvers to determine if it is able to approach the ISS to be captured by its robotic arm, a feat that requires extreme precision. If all goes well, Dragon will splash down in the Pacific on May 31 loaded with ISS cargo.

A PR sidebar to todays launch: Falcon 9 blasted off with the ashes of Star Trek actor James Doohan. Those ashes with the remains of 307 other people are now orbiting the Earth.

Scotty has been beamed up for good -- or at least for another year before Falcon 9 falls back to Earth and is burned up during re-entry.