Chevron has dropped Ogilvy PR and Ogilvy Government Relations after it uncovered a serious, material conflict of interest, according to Dave Samson, general manager of the PA unit of the oil giant.

The move follows a Bloomberg report that Ogilvy staffer Felipe Benitez addressed the Amazon Watch group, which fights for the rights of indigenous people living in rainforests. 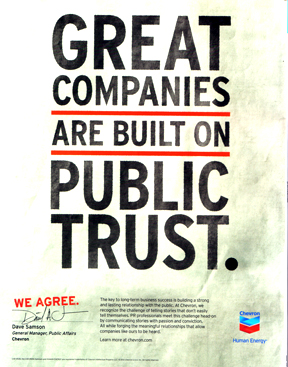 Chevron has been fighting an $18B judgment against it from an Ecuadorean court that ruled it is responsible to clean up pollution that the San Ramon, Calif.-based oil company inherited from its acquired Texaco unit.

Prior to Ogilvy, Benitez worked at Fenton Communications, where he counseled Ecuador on global image matters.

Samson, via email, said there has been misreported information in the media. It is clear some parties want to distort the facts to minimize the serious nature of the conflict that forces us to take this action. He did not provide more details about that conflict.

The decision to terminate Ogilvy was not taken lightly, according to Samson.

Its also important to note that our decision was in no way a reflection of the people at Ogilvy who worked day-to-day on our business. They were good partners. Any effort, by some, to minimize this issue is unfair to these people, he noted.

Ogilvy has called the split from Chevron primarily a personnel matter that it cannot provide further information about.

Chevron will re-assign the Ogilvy work.