Kraft Foods Inc.'s decision to ditch the New York Stock Exchange for NASDAQ is good news for the electronic exchange that has been battered by its botched handling of Facebook. 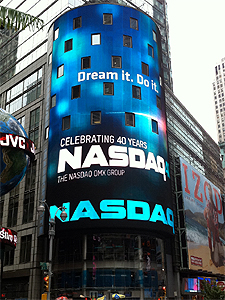 NASDAQ chief Bob Greifeld has apologized for Facebooks screwed-up IPO, but his offer to offer $40M in comp to make amends has been met with howls of derision.

Penny-pinching Kraft and its ill-named Mondelez International unit, which is slated for spin-off by the end of the year, cite cost efficiencies and better visibility advantages for the companys iconic brands as reasons for going the NASDAQ route.

When Northfield, Ill.-based Kraft talks about more visibility, it's referring to NASDAQs Times Square billboard. At the risk of sounding like a snooty New York native, the Times Square hoard is not exactly a crowd that is eager to watch an Oreo commercial or plugs to buy Kraft's stock.

The Crossroads of the World has been transformed over the years into New York Citys version of America USA. New Yorkers avoid the place at all cost. Tourists mob the Gap, Levis, American Eagle, Sephora, American Kitty, Sunglass Hut, Lids, OMG, Fossil, Disney, Forever 21, ferris-wheeled Toys R Us and Aeorpostale that have sprouted up in sanitized Times Square.

They eat at chains like McDonalds, Applebees, Sbarro, Dominos, Chevys and Hard Rock Café. [Tip for visitors: the only public restroom in the district is at the Times Square Museum and Visitors Center.]

Kraft may save lots of cash with NASDAQ listing, but the increased visibility reason doesnt add up.

If Kraft wants to capitalize on the bustle of Times Square, it should follow the example of Hersheys and M&M Mars and open a Kraft store there.

The company could sell crates of Oreos, Jell-O, Kool-Aid, Velveeta, Chips Ahoy!, Philadelphia Cream Cheese and Miracle Whip there. How about an exclusive version of Kraft Macaroni and Cheese with a birds-eye view of Times Square on its box?

That would be some collectors item, or at least a thing to sell on eBay to try to recoup a bit of the cash that a visitor spent in NYC.