Nice guy Barack Obama is getting rolled by Republicans in Congress because hes just too civil.

That's my take from Weber Shandwick/Powell Tates just-released Civility in America survey finding that 67 percent of Americans rate the presidents general tone as civil. That puts him right up there with non-threatening and feel-good Oprah Winfrey, who scored a 69 percent civility rating. Barry got to toughen up or he's toast. 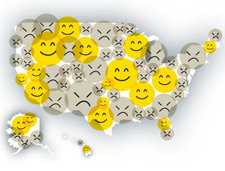 Republicans in Congress and their Tea Party allies are downright nasty, according to the survey. Each scores a 60 percent uncivil rating. GOPers and Tea Partiers are even more uncivil than their Fox News echo machine, which gets a 51 percent uncivil score.

Theres hope for Congressional Congress. The partys uncivil rating soared 12 points to 56 percent, probably do to the daily humiliation they suffer in Congress at the hands of John Boehners and Eric Cantors crew. Only professional sports (+14 points to 68 percent) surpassed the Dems in the growth of incivility.

Two-thirds of respondents expect the presidential election to be uncivil. Forty percent accept incivility as part of the political process. That gives Obama the opportunity to step up attacks on Congress that is killing any hope of economic recovery.

Ohio Representative Jim Jordan, chairman of the conservative Republican Study Committee, elegantly described why Republicans are stalling on any jobs program that goes beyond approving the Keystone Pipeline, renewing Bush tax cuts and cutting regulations. Why dont we wait for the reinforcements to arrive after the election, said Jordan.

That's okay for Jordan, who has little to worry about. His fourth Congressional district (median household income of $40K and towns like Findlay, Lima, Mansfield and Marion) last elected a Democrat in 1936.

But Jordans indifference to the worry of the millions of Americans who are out of work across this land should be a central selling point of Obamas re-election campaign.