Breathtaking in its spin, Senate Minority Leader Mitch McConnell made a stirring defense of the First Amendment -- for corporations and the billionaire Koch brothers -- in a speech today at the American Enterprise Institute. 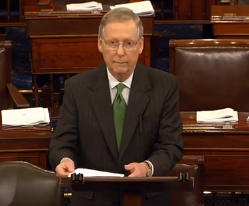 After paying a mandatory tribute to Alexis de Tocqueville, the Kentucky Senator warned against the danger that comes from a political movement thats uncomfortable with the idea of groups it doesnt like speaking freely, and from an administration that has shown an alarming willingness itself to use the powers of government to silence these groups.

In McConnells mind, the great danger that poses a threat to the republic is the Disclose Act, a response to the unfortunate Citizens United ruling that would require disclosing the names of contributors to political grassroots groups.

Mitch thinks that is very, very scary that the names of billionaire and corporate donors would be public under DA. This is nothing less than an effort by the government itself to exposes its critics to harassment and intimidation, either by government authorities or through third-party allies, said McConnell.

Going off the deep end, McConnell says DA could lead to an increase in swatting of political opponents. McConnell said:

Heres how it works. Somebody who knows how to hack into phones calls 911, ostensibly from your phone, and tells the police they just killed somebody. Within minutes, the local SWAT team shows up at your house, guns drawn, helicopters swirling overhead. And while this tactic is clearly criminal and should be prosecuted aggressively, the goal is equally reprehensible  namely to scare people whove dared to speak, write, or otherwise support a cause that the Swatters dont like.


McConnell says DA is an attempt to restrict or muzzle political speech, which is far from the truth. The Koch brothers could continue to spend millions under DA. Americans would just get to know who is picking up the tab for the advocacy.

Theres already a pre-WWII law, Foreign Agents Registration Act of 1938, requiring foreign countries to disclose the names of U.S. lobbyists and the money that they spend to influence American public opinion.

FARA, which was passed to out Nazi propaganda here, hasnt restricted Saudi Arabia, China, Pakistan, Bahrain and Mexico from shelling out millions to buff their image here. What do they have to hide?

The Koch brothers have nothing to fear from DA. A little sunshine never hurts.