Congressman Private Ryan doesnt have a prayer against the nine-state nuns on the bus tour that began in Ames, Iowa, on June 18 and concludes July 2 in Washington to protest how his proposed budget would decimate programs that help the poor and needy. 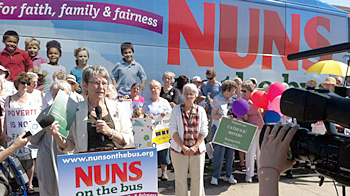 Seven of my nine teachers at Saint Michael's elementary school in Sunset Park, Brooklyn were nuns. My takeaway: you dont mess with them.

I vividly recall how 6th grade teacher Sister Grace pounded my head against the blackboard after I made a math mistake, saying youre so dumb for such an intelligent person. She made my buddy Marty pony up 50 cents to pay for the pointer that she smashed to bits after slamming it across his desk during a spelling drill. The good Sister was eventually retired to the library, where she would whack kids who forgot to bless themselves with holy water upon entering the room.

The website has tips on how to write a letter-to-the editor with the core message:

Catholic sisters live out our faith by serving people who are poor in communities and standing up to immoral budget cuts that harm them. We stand with the Catholic bishops in saying Congressman Paul Ryans federal budget is unjust and wrong.

The site reminds visitors that economic justice is a pro-life issue to dispel the notion that Catholics are only interested in birth control and abortion.

At any stop, the bus will have 15 nuns from a variety of orders. To keep spirits up and the message fresh, the nuns rotate on and off the bus.

The nuns have come a long way since Sister Grace.