David Cay Johnston, author of "Perfectly Legal: The Covert Campaign to Rig Our Tax System to Benefit the Super Rich--and Cheat Everyone Else ," (2004) was elected president of Investigative Reporters & Editors at its annual conference June 16.

Johnston, who worked at the New York Times 13 years, winning a Pulitzer Prize in 2001 for describing loopholes and inequities in the tax code, will publish in September "The Fine Print: How Big Companies Use Plain English to Rob You Blind."

Currently a columnist for Reuters, working out of Rochester, he is a constant critic of U.S. economic policies.

A column yesterday headlined Americas Long Slope Down, says Americans are in much worse shape than when we paid higher taxes, higher interest rates and made more of the manufactured goods we use.

Average incomes have fallen 9% from 2000 to 2010 and the number of workers rose only 1.5% although the population grew 6.4 time faster, he writes, adding: Thats why millions of people cannot find work no matter how hard they try. 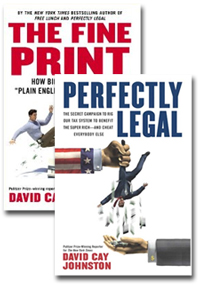 A column June 16 raked JPMorgans Jamie Dimon over the coals, charging that unnecessary and even illegal risks by the bank caused the loss of more than $2 billion. Banking interests are blocking implementation of the Volcker rule that would bar speculative trades and are also fighting restoration of the Glass-Steagall Act which confined banks to taking deposits and making loans, he wrote.

The S&L crisis of the late 1980s was a mere hand grenade compared to the weapons of mass wealth destruction that went off on Wall Street four years ago and others that remain primed and ready to explode, says the article.

The June 18 New Yorker echoes this theme in an article on President Obamas possible second term. Tax rates as of Jan. 1 will shoot to levels not seen since 2001 and Medicare payments to doctors will be cut by a third (causing some doctors to refuse Medicate patients), says the piece. The $500 billion+ drop in government spending could send a fragile economy back into a recession, it adds.


IRE Has $4.8M in Cash/Investments

The full audit is on the IRE website in the non-member area.

PR groups, including the PR Society, typically do not make their audits available to non-members. Only members can see the audit and quarterly financial reports of PRS.

Who qualifies as an investigative reporter is an open question. Todays writers often flip from writing about companies and institutions to writing for them. PR people commonly have their own blogs that perform journalistic roles including providing opinions and analysis.

Reporters are barred from joining the PR Society, although most press groups allow PR people as members. The National Press Club has more than 800 PR associate members.

The IRE board of directors includes Leonard Downie Jr., VP at large of the Washington Post where he was executive editor from 1991-2008. A 44-year Post veteran, he helped supervise its Watergate coverage. He became Weil Family professor of journalist at the Walter Cronkite School of Journalism and Mass Communication at Arizona State University in 2009.

Also a director is Lea Thompson, who was a chief correspondent at Dateline, NBC for 16 years and headed the investigative unit and anchored at WRC-TV, Washington, D.C., for 15 years. She is now doing documentaries and teaching investigative reporting.

Another director and past president is Alison Young, who does watchdog reporting on health issues for USA Today. She previously wrote a weekly watchdog column called Spotlight for the Sunday Atlanta Journal-Constitution.