Ogilvy Government Relations implosion in Washington that began June 20 with news of CEO Drew Maloneys exit for the external affairs post at the Republican National Committee kicked off the most eventful six days in PR that this blogger can remember in more than 20 years of covering the PR scene. 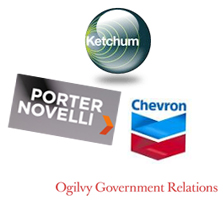 Those departures followed the earlier in the month loss of the Chevron account due to a series material conflict of interest uncovered at its sister WPP firm, Ogilvy PR Worldwide. That loss had OGR people fuming, and revived the age-old tale about the wild and wooly K Street struggling under corporate ownership. OGR now reports directly to WPP boss Martin Sorrell.

The fate of Omnicoms Porter Novelli followed the Ogilvy saga as PR watchers questioned the viability of the PN brand following Fridays announcement that tech maven Gary Stockman is exiting July 31 and being replaced on a temporary basis by its global strategist.

Compared to sister firms Fleishman-Hillard and Ketchum, PN hasnt exactly been lighting the PR world on fire. It was more than interesting that the announcement of Stockmans departure included this statement from OMC diversified agency chief Dale Adams: The Porter Novelli history and its future make it a valued member of the Omnicom family and we will fully support the leadership transition and appointment of a new chief executive officer. Is that the kiss of death?

On a more positive note, Ketchum capped the busy news cycle, announcing today that Rob Flaherty is succeeding Ray Kotcher, 60. Flaherty, who joined Ketchum in 1989, has been groomed for the post. He took over the presidency four years ago, after heading New York, corporate and counseling big accounts IBM, Pfizer and FedEx.

At age 52, Flaherty has time to put his own stamp on Ketchum. Stay tuned.

There were some interesting side shows during the six-day period. Michael Steele, the guy who just about ran the Republican National Committee into the ground, entered the PR arena in a partnership with crisis guru Lanny Davis. Steele is remembered for coining the priceless drill, baby, drill mantra to outline the Republican energy policy.

Meanwhile, WPPs Sorrell -- while defending his bid for a juicy compensation hike that was turned down by shareholders -- took a pot shot at the age of members of Omnicoms board of directors. He noted that OMC chairman (Bruce Crawford) was 82 or 83 and on the board for 25 or 35 years.

According to OMCs proxy, Sir Martin is right about Crawfords age (83), but off on his board service (23 years).

Who knows what the next six days will hold for PR?