A $100M sex discrimination suit against Publicis led by a former MSLGroup executive was conditionally certified as a class action by a federal judge June 29, paving the path to potentially sign up more current and former MSLGroup employees as discovery continues.

Judge Andrew Carter of U.S. District Court for the Southern District of New York said the plaintiffs made a modest factual showing to show they were victims of a common policy or plan that violated the law. 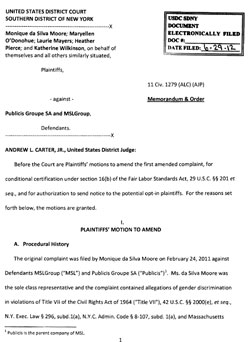 The ruling applies to MSLGroup in the U.S. only as the court has not yet ruled whether it has jurisdiction over the Paris-based parent company.

Publicis in a statement called the conditional certification a "procedural ruling only and not unexpected."

The suit estimates 125 potential plaintiffs are in the class.

Janette Wipper, lead counsel for the plaintiffs and a partner at Sanford Wittels & Heisler, said the decision gives female Publicis Groupe professionals the opportunity to participate directly in the suit. And even more importantly, it brings women one step closer to making equal pay for equal work a reality in the PR industry, she added.

Monique da Silva Moore, former healthcare director for MSLGroup, filed the class action in February 2011 in federal court in New York, alleging female staffers are not paid equally with men and are denied opportunities because of gender.

Da Silva Moore left MSL in 2010 to head North American healthcare for Ogilvy PR, part of WPP. She exited that firm in May to direct public affairs for Biogen.

The plaintiffs submitted evidence that contends female VPs and senior VPs at Publicis were paid from 8.5% to 11.2% less than male counterparts. Da Silva Moore and another plaintiff, Maryellen ODonohue say they were paid more than $100K less than men in the same position.

Publicis has noted the Equal Employment Opportunity Commission dismissed the charges leveled by da Silva without issuing a finding. The EEOC did issue a right-to-sue letter.

"In making this preliminary ruling, the court did not resolve any factual disputes, nor decide substantive issues going to the ultimate merits, nor make credibility determinations," Publicis said in a statement via MSLGroup. "We will continue to defend vigorously against all claims by plaintiffs and look forward to the court dismissing them, just as the EEOC dismissed them in 2010. MSLGroup always has been and will remain an organization committed to equal opportunities for women and for all employees in the workplace."