Position-shift master Mitt Romney is taking heat for now calling the healthcare law mandate requirement a tax, two days after senior aide Eric Fehrnstrom and a campaign release referred to that provision as an unconstitutional penalty, probably not a tax. 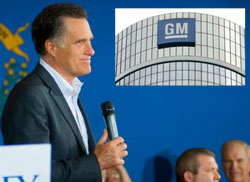 Mitt prefers to label the mandate provision of RomneyCare, father of ObamaCare, as a "penalty" rather using the T-word, which never crosses the lips of conservatives without the word "cut" before it.

The former Massachusetts governor should take advantage over the current tax tempest by throwing a switcheroo on president Obamas auto bailout into the mix.

The Detroit News reported yesterday that U.S. truck and auto sales will top the 14M mark for the first time in five years. Chrysler, where the Obama administration engineered a shot-gun marriage with Fiat, led the pack. Its sales rose 30.3 percent. Non-bailed out Ford was up 7.1 percent and GM rose 4.3 percent.

The companies, however, would have driven off the cliff in 2009 without the support of the Obama White House.

Go ahead, Mitt. Shift gears and take credit for the GM and Chrysler resurrection from the near dead. When it comes to changing a position, you are a master.

A switch on the bailout might help you pick up a couple of votes in Michigan.

Some people have such short memories.