Northeast Utilities chairman Charles Shivery is strongly committed to doing whats right and to integrity. NU PR staffer Anita Saunders should follow those principles in running for the Tri-State district seat on the PR Society board (PDF).

Shivery lost his CEO title in April as part of NUs takeover of rival NStar, a smaller utility. But he continues as non-executive chair. New CEO of NU is Thomas May, NStar CEO who has been with the utility 34 years.

Although smaller than NU (serving 1.1 million customers vs. NUs 2.4 million), NStar gave May a $10.75 million pay package in the latest available year, which is about double the Shivery package of $5.53M. May also has $22M of stock and Shivery, $23.2M. May took in $37.23M in the latest five available years while Shivery took in $29.87M according to Forbes. 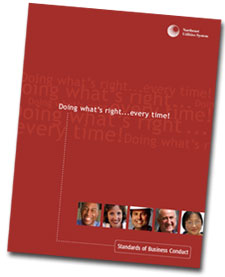 The takeover was criticized by New York Times writers Rob Cox and Robert Cyran in a Dec. 4, 2011 article headlined, Reasons to Stop a Utility Merger.

They said a report for Connecticut found numerous faults with NUs Connecticut Light & Power unit in preparation, response and communications before and after the Oct. 29, 2011 snowstorm.

More than 800,000 homes and businesses lost power for more than a week after the storm. A similar outage occurred after Tropical Storm Irene hit the area in August.

CL&Ps worst-case plan foresaw an outage affecting 100,000 customers or 8% of the 1.2M total. However, 70% of customers lost power. Another state utility, United Illuminating, only saw 15% of its customers cut off in the same storms and power was restored more quickly, says the NYT.

Cox and Cyran, noting that utilities have monopolies and that few customers ever get to choose their providers, say they doubt NUs plans to save $784M because of the takeover and conclude: Its hard to see how regulators can give the nod to NU getting an even larger monopoly.

The Standards of Business Conduct (PDF) on the NU website have the cover title Doing Whats RightEvery Time.

Shivery writes, Of all the things that contribute to the success of our company, none are as essential as the integrity of our actions. Acting with integrity means that we do whats rightin situations where the law is there to guide us, and in those where it is not. With integrity, we earn the greatest single asset a business can aspire to: the trust of its employees and external stakeholders.

This blog is being sent to Saunders, sole candidate so far for Tri-State director of PRS, in the hopes that she will live up to those lofty promises and answer questions put to her by this website, members and non-members. She can be challenged by other candidates until Sept. 13 but its hard to challenge a candidate who is incommunicado.

Members want access to the list of Assembly delegates and to be able to study what was said in the Assembly. Reporters were banned from the 2011 Assembly and no transcript was published.
Ten issues of vital concern to members and non-members have been sent to Saunders and the other candidates.

I called an NU emergency media line over the weekend and got an employee who said the line handles problems such as electrical outages. I said that whats involved here is an ethical outage. He was unable to help.

This blog is not just about the candidacy of Saunders or overpaid utility executives but about the unavailability and even invisibility of corporate/institutional PR staffers, as illustrated by NU.

Marie van Luling (PDF) is VP-communications for NU but I couldnt find her name or contact points anywhere on the NU site. A member of the Arthur W. Page Society, she has just returned from the annual meeting of secretive (PR) Seminar that took place June 3-6 at the Park Hyatt Aviara Resort near San Francisco. She also attended the two previous years.

A lawyer (Villanova School of Law), she managed the Boston office of MSLGroup until she joined Bank Rhode Island in 2004. Previously she spent 11 years at Aetna Life & Casualty.

Other NU contacts who didnt respond were Caroline Pretyman, director of media relations, former reporter for WCAX-TV, Burlington, who joined in 2005, and PR staffers Al Lara and Michael Durand.

Joseph Nolan (PDF) is SVP of customer and corporate relations of NStar in charge of media relations but I couldnt find his name on the utility website. He has been with NStar since 1985. Calls to NStar media relations were directed to the phone of Pretyman.

Harold Burson, describing the main duties of PR people in accepting the Paladin Award of the PR Society Foundation earlier this year, said the first duty was listening, the second being the corporate conscience, the third being a communicator and the fourth being an ombudsman who agitates when programs are falling short of expectations. .

May, Shivery, van Luling, Nolan and Pretyman may not know much about the PR Society but they will if they open the links below.

They may find in them the answer as to why Saunders is the only candidate running for Tri-State, an area that includes New York City, site of the single biggest city chapter within the 21,000-member group (plus 10,000 student members). Why wouldnt someone from NYC seek this post? Can Saunders do justice to the needs of New York from Berlin, which is outside of Hartford?

They may also find the answer as to why no one at all will run from the Northeast district this year although about 400 APR members are eligible. A clue might be obtained as to why no one showed up for the Southeast, Southwest and North Pacific districts last year although about 1,200 members in all were eligible to run. At-large directors now represent the districts. Why is it so hard getting anyone to serve on the board?!


Key Blogs and Reports on PRS

 UNESCO says murders of journalists and interference with their duties is worldwide scandal and especially the impunity granted to offenders by governments and professional associations; 51-page study published

 2010 chair Gary McCormick and COO Bill Murray visit Jack ODwyer in his office March 19, 2010 and tell him for nearly an hour that PRS has chosen not to deal with him

 PR Society, whose leadership is dominated by PR people from South and West, have short-changed the New York chapter in numerous ways