Mitt Romney has been running around the country, repeating his tired old slogan of this president just doesnt understand the economy.

That has had zero effect. 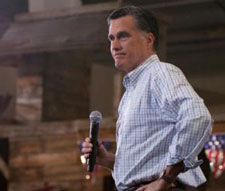 Its candidate Romney who just doesnt understand the importance of PR in a presidential campaign. Romney and his advisors are clueless about how out-of-touch the former Massachusetts governor is with hard-press voters.

Romneys vacation is exhibit A. The New Hampshire family jaunt was a campaign-killer. The July 4 image of Mitt and wife Ann riding around a jet ski on Lake Winnipesaukee and the one July 5 of Mitt at the wheel of a gigantic power boat are pure gold for Team Obama.

Romney is right when he said that every family deserves a vacation break, but the typical family doesnt have a person running for president in it. Does Romney really want to be commander-in-chief? Barack Obama is skipping his Marthas Vineyard trip this year. He has more important things on his mind.

And what did Mitt do after he closed down the $8M family compound in Wolfeboro, New Hampshire? He traveled to the Hamptons to scrounge up some dough from the Koch Brothers and the millionaire set. That resulted in more great shots of Rolls-Royce gridlock for Obamas people.

Romney may be out fund-raising the president, but polls today report that Obama is widening his lead in swing states such as Pennsylvania and Wisconsin, and leading by eight points among registered voters.

Theres more image trouble ahead for Mitt. Anns horse will compete in the dressage (e.g., fancy horse ballet) competition in the just ahead London Olympics. Dressage is not exactly as American as baseball and apple pie.

As organizer of the Salt Lake City Olympics, Mitt is scheduled to be in London for the Games. He should stay as far away from the dressage event -- or better yet -- skip the Olympics entirely to concentrate on getting his campaign on track.