Large corporations are making some progress to connect with customers, employees and the public through social media, but the move to so-called social business remains the biggest communications challenge, according to an in-depth study by FedEx and Ketchum.

Communications and marketing execs at 55 companies responded to the study, including Xerox, IBM, Bank of America, Corning and Cisco, reporting on efforts to engage external and internal audiences with social media endeavors.

FedEx and Ketchum, which conducted a similar study in 2010, found that a corporate comfort zone with social has evolved after extensive discussion two years ago about developing policies for employees in social media. Embrace of social communications from the executive level has extended down through organizations. The study found that seven in 10 corporations now engaged in social media say their executives believe engagement in SM adds value through brand or reputation building. 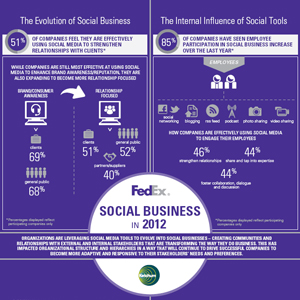 As Bank of America communications exec Peter Osborne said, We wouldnt have been this active if it wasnt for the companys executives.

Privacy and legal issues are among key concerns in social business. Twenty-seven percent of companies in the survey said that concern has increased over transparency issues. In a world where nothing can be hidden, you better have nothing to hide, said Cargill VP Mike Fernandez.

Forty-five percent reported increased concerns over legal or compliance issues when engaging clients. Other worries include who owns content when a staffer leaves and the continuing presence of erroneous information inline, even when its corrected.

Aaron Miller, a social media and marketing strategist for General Mills, noted the crisis that struck Susan G. Komen earlier this year when the organization cut ties with Planned Parenthood enveloped a General Mills unit and supporter of the organization, Yoplait yogurt.

Miller said when the crisis struck it was too early to make a business decision on whether to sever ties with Komen, so the company created a separate tab on its Facebook page, where much of the conversation was happening, for consumers to post their thoughts. They felt that we were listening, that we cared that they wanted to share their thoughts and that were taking it seriously, he said.

Miller said the conversation calmed because consumers felt they had a venue to talk and that the brand was listening.

In addition to lingering concerns, measurement is also a hurdle for businesses engaging in the social realm. Most companies (84%) in the Ketchum/FedEx study measure engagement in their social efforts, followed by impressions (69%), influence (53%) and tone (51%). While the vast majority agree that there will always be aspects of marketing that cant be measured, the same group still sees the efforts as important, nevertheless.

Gayle Weisswasser, VP of social media Discovery Communications, told the study that Discovery can effectively measure volume of commentary in social media around its programming, affirmative engagement of its social efforts (likes and shares on Facebook, tweets), and effectiveness of social accounts in driving traffic to Discoverys website. The difficulty lies in tying social efforts to actual tune-in viewers to the companys programming.

I think that all of us [networks] would love to see more direct evidence of social media on ratings, she said, noting there have been a few studies by TVGuide.com and Nielsen which show social has some positive effect.

Fewer than half of companies (44%) surveyed said they continuously engage employees through social media.

Social media is providing us an avenue to reach a broad base of employees that we cant do with our current structure, said Dan Collins, division VP for corporate communications at Corning, which is among the 44%.

Collins said because of acquisitions, geographic expansion and legacy systems, as well as the nature of manufacturing operations, Corning cant reach every employee simultaneously. But he said social is useful for information that isnt of a personal nature, like pointing staff to read a positive quarterly earnings announcement. Thats an effective way of communicating to them, he said.

Companies said they use social media for employee communications to strengthen relationships (46%), share and tap into expertise (44%), foster collaboration and dialog (44%), and increase participate in a program (39%).

Chris Atkins, director of U.S. PR and communications at PricewaterhouseCoopers, said his companys most successful internal/social effort so far has been to press employees to keep updated profiles and regularly post content on LinkedIn, to which every staffer has premium access.

LinkedIns been a really important and eminently controllable  which always appeals  platform for us, he said, noting its been a go-to resource for media for thought leaders and recruits who are just trying to find out the tone of the organization.

Atkins said his team is currently going to senior clients to ensure they are up to date on their profiles and show them how to post content.

View the study results at 2012socialbusinessstudy.com.