JPMorgan Chase chief Jamie Dimon has a lot to worry about in the aftermath of the $6B trading loss that he admits has shaken our company to the core. 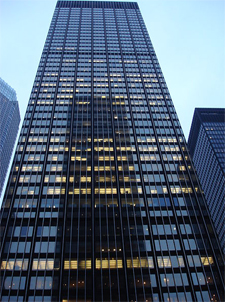 The former golden boy of the U.S. financial world faces the dual challenge of restoring his own and the banks reputation.

Heres a free PR tip for Dimon: Lighten up on security at the banks 270 Park Avenue headquarters (pictured) and the old Bear Stearns complex down the street at 383 Madison, where my father worked for many years as the chief engineer.

The massive security screams, We are a bank under siege. Security guards are stationed outside 270 Park to check the credentials of employees and visitors, who today could only approach the building through two checkpoints. A New York City police office patrolled the perimeter of the building.

The only thing missing is a moat.

The refurbished Bear Stearns building once served as a pedestrian mall to allow New Yorkers to cut through from Vanderbilt to Madison Ave. No more. More security is stationed outside, while inside a chicken wire-like fence separates entrance to Bear Stearns office from other tenants. Its an image of us vs. them

Jersey barriers erected in front of the Chase branch on Madison Ave add to the fortifications of Americas No. 1 bank.

Tens of thousands of New Yorkers, workers and tourists pass Fortress Chase each day. They wonder whom is Dimon is defending against.

Could it be terrorists, Occupy Wall Streeters or an army of irate customers/disgruntled former employees/stockholders ready to grab their pitchforks and storm Dimon world?